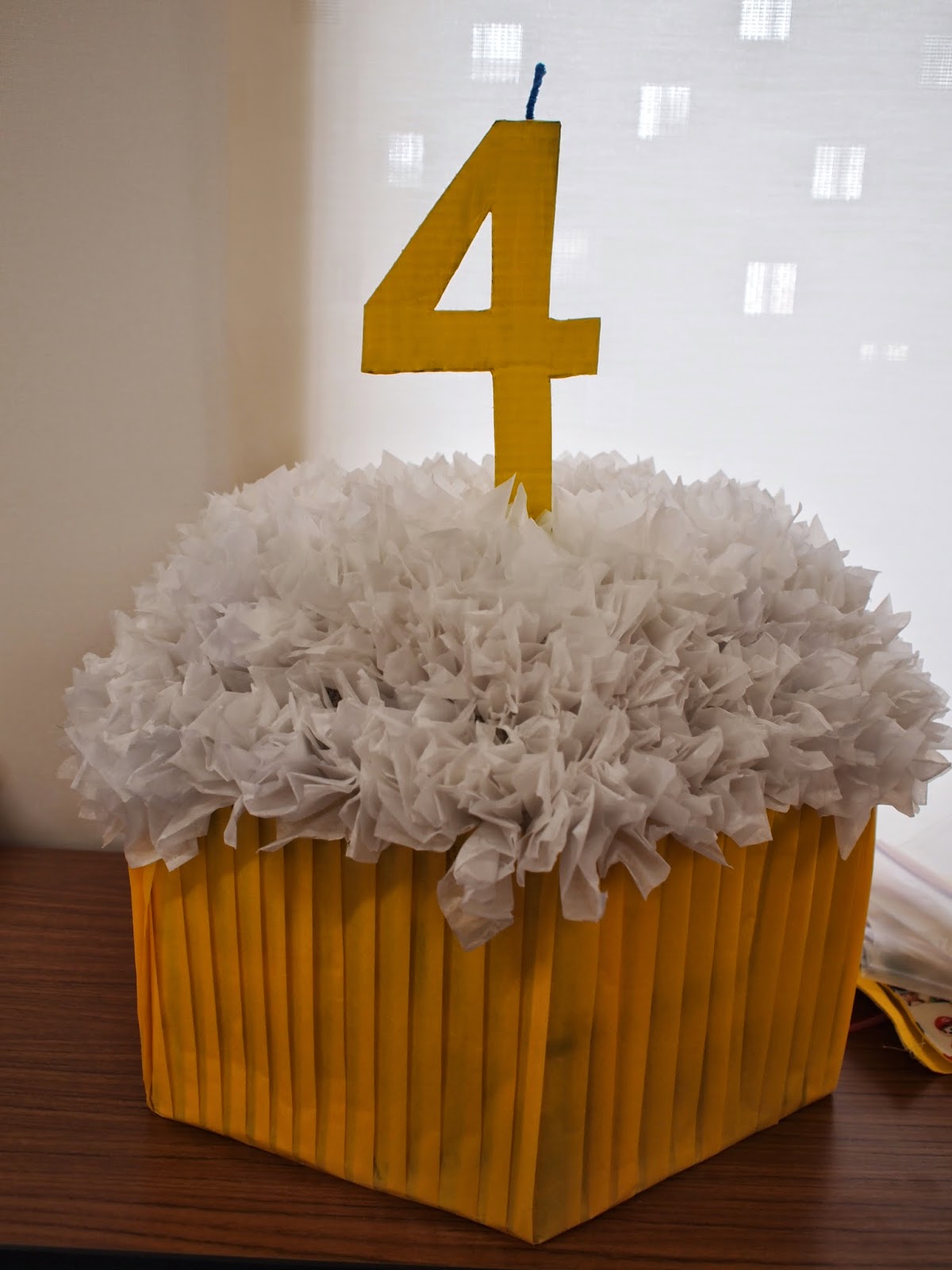 In yesterday's post, I said that a birthday party isn't a birthday party without cookies. But what REALLY makes a birthday party a birthday party, in my book at least, is the piñata. A piñata was a must at our birthday parties growing up, and they will most certainly be a must for my children's parties as well. Aside from a year here and there, my mom made our piñatas from scratch and given that piñatas aren't really a thing here, I will likely do the same.

I was wondering what kind of piñata to make for the party, when I came across this box from T's Bumbo. It looked like it would be perfect for the base of a cupcake. I think that it's because of this box that the whole baking/cupcake theme emerged. So, here's how I did the piñata:

First I cut off the top of the box. 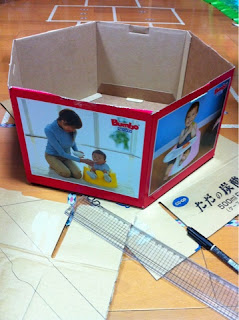 Then I flattened out a second box, and traced the Bumbo box on it. Moving about 20 cm in, I made a second hexagon on the inside. 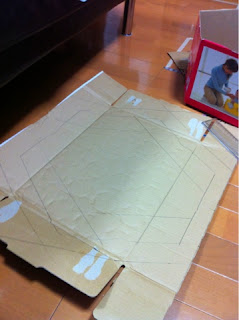 Then I cut out the big hexagon and cut from each corner into the smaller hexagon. 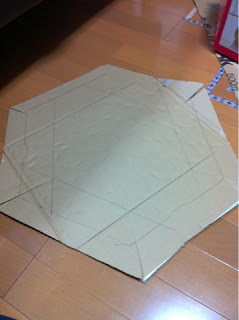 Next I cut out the corners and scored the little middle hexagon to make it easy to fold. I also cut out a rectangle in the middle to make the hole for hanging and filling the piñata. 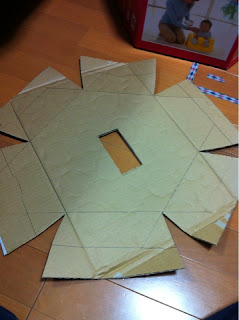 Then I folded the hexagon sides down and taped them to the box. Notice the open space between the corner pieces - not a big deal because the next step was to paper mache this bad boy. 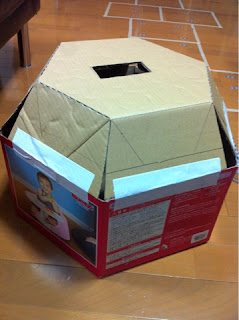 And paper mache I did. Once it was nice and dry, the next step was to decorate it. I figured this would take a while, so I had The Mindy Project playing while I decorated. 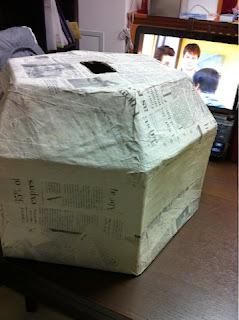 I found some yellow wax paper at the 100 yen shop and picked up a few rolls of that, as well as some yellow electrical tape. For those not in the know, K's favorite color is yellow. It always has been and I don't really see it changing in the future. I cut the rolls in half so that they would be about 10cm longer than the cupcake base. Then I folded the paper so that the folds slightly overlapped. (I don't really know how to explain what I did, but it's pretty obvious from the photo, I think.) 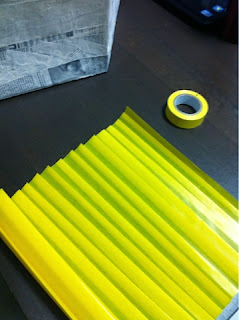 I glued the top part of the cupcake liner to the top of the base and taped on the bottom. 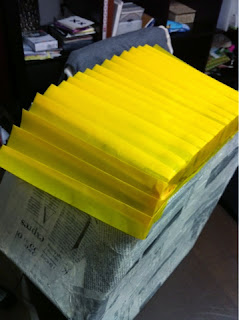 I was as careful as possible around the corners. I tried to fold them so they would look nice and clean, but some were definitely better than others. 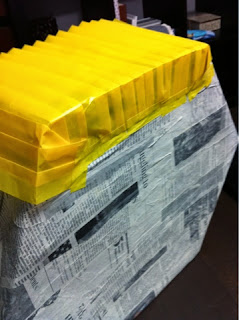 I got the whole way around the base of the cupcake, but there was obviously still a big, empty space in the middle. 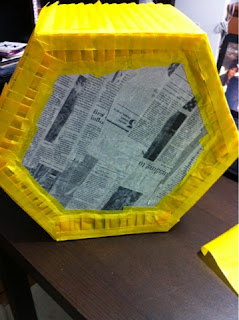 I taped a piece of wax paper to cover it, but you could totally see through it. 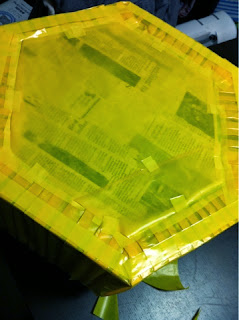 It probably wouldn't have been the end of the world had I left it like that, but I wanted it to be yellow too, so I covered it in electrical tape. Extra support doesn't hurt either!! 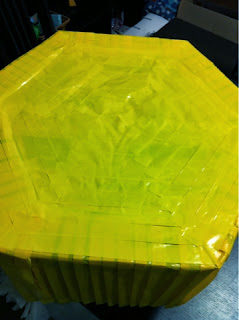 At that point, I called it a night. The next day, it was time to do the top part. I cut out a million squares of white tissue paper and busted out a highlighter, some glue, and The Mindy Project. 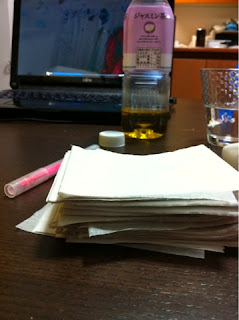 I harkened back to my elementary school days and did the whole tissue paper flower thing. About 10,000 times. 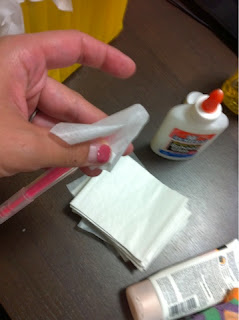 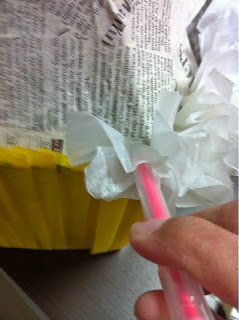 Look at all that fluff!! 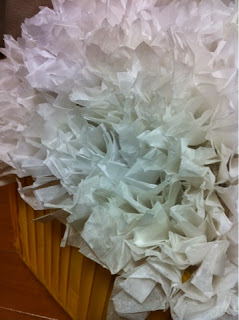 The weekend before the piñata making, K and I went shopping for party things and he saw a yellow "4" candle. He HAD to have it. I had planned to make the cake look like the piñata, so I wanted to make a yellow 4 candle for the piñata as well. To do this, I cut out a 4 and then two small rectangles, the same width as the four. I scored the rectangles and then bent them out to give the 4 some support. 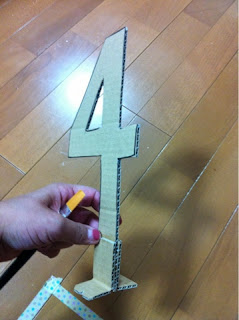 Then I painted it with yellow acrylic paint, stuck a pipe cleaner in the top, and glued it to the top of the cupcake. Then I covered the whole top with more tissue paper frosting. 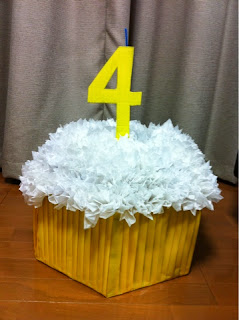 The piñata was obviously a hit at the party - who doesn't like bashing something with a metal pole!? About half of the kids were neighborhood kiddos, so they had done a piñata before. For the other half, his school friends, it was their first time. ﻿ 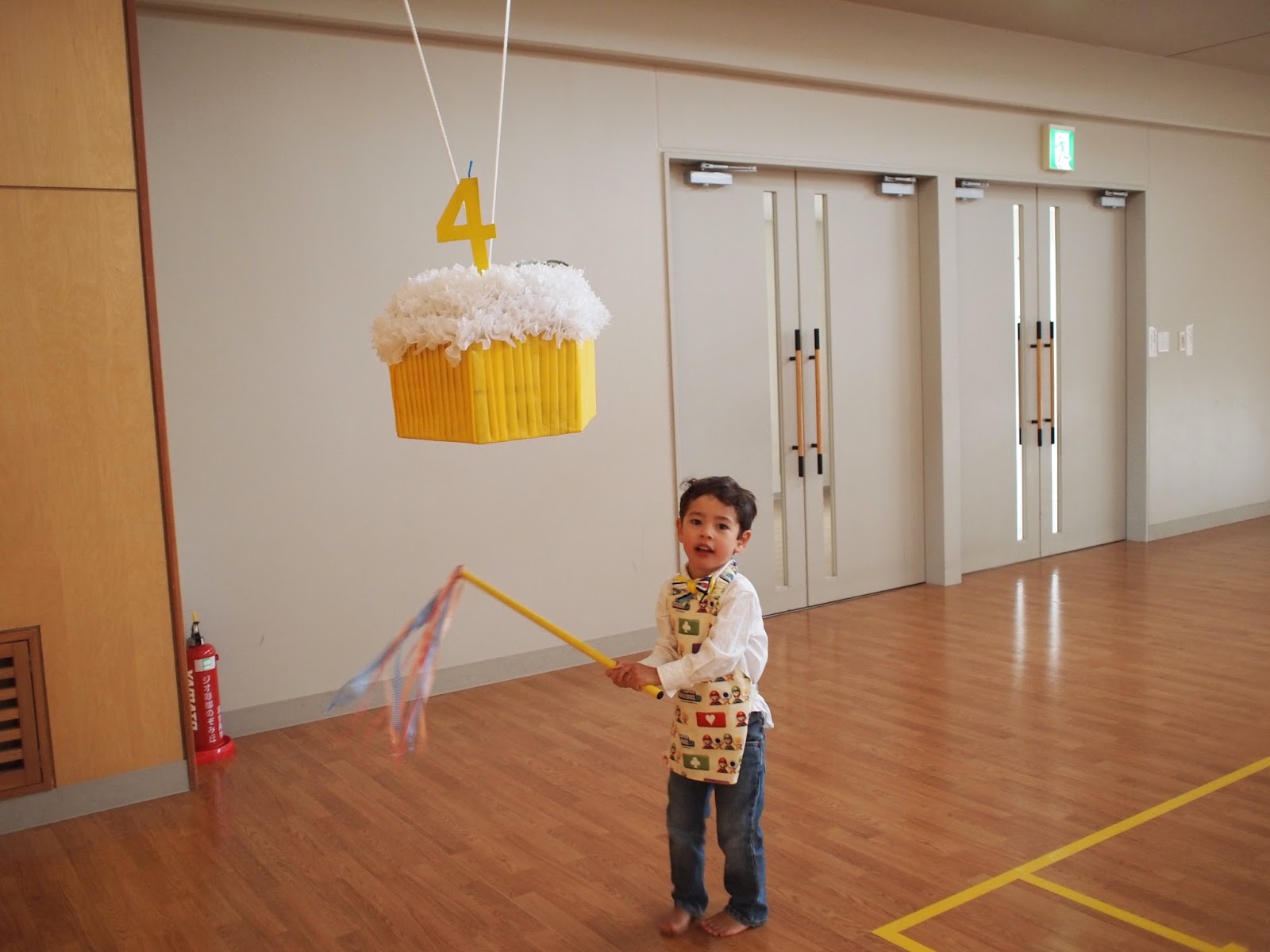 We had each kid hit it once, but they all wanted to do it again, so they each had a second turn. 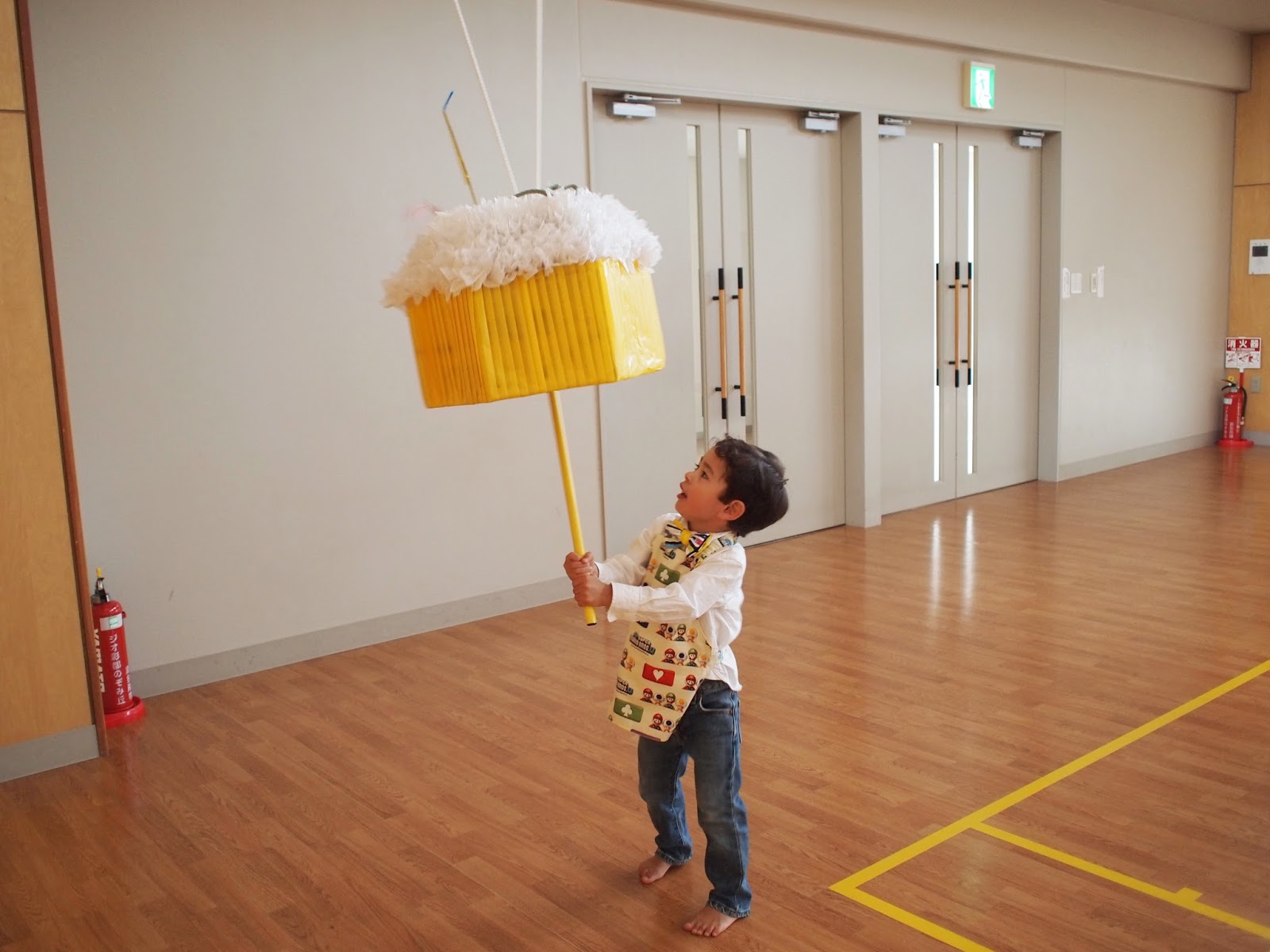 We only had the gym, where we did the piñata, rented for an hour and with just the kids hitting it, we would have been there all night. We passed the pole to K's teachers, then the moms, and finally the dads. The second dad to go broke it. 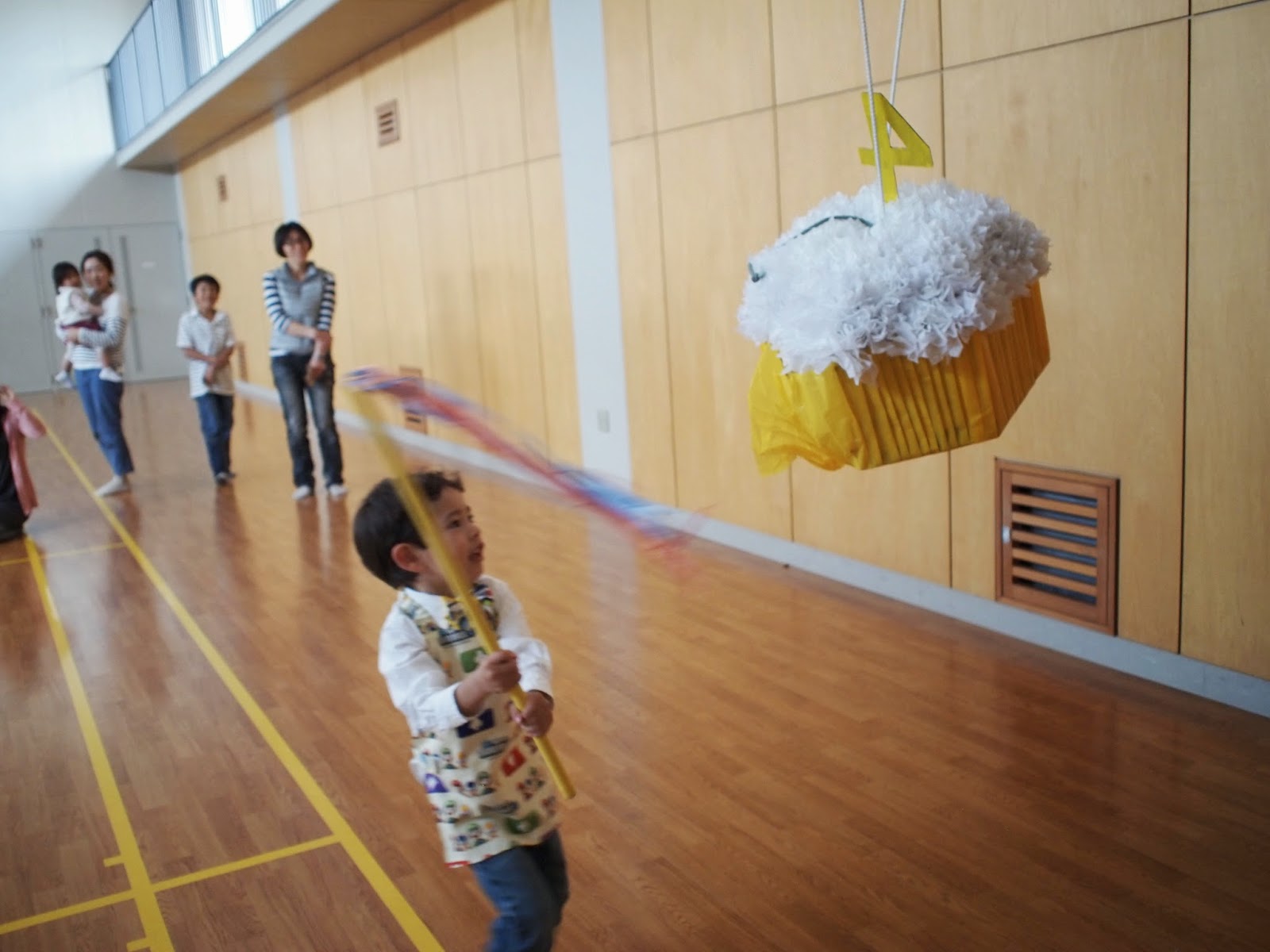 As soon as it broke, the kids came in for the goods. I handed each of them a little paper bag and they went to town. Some more than others, of course. ﻿ 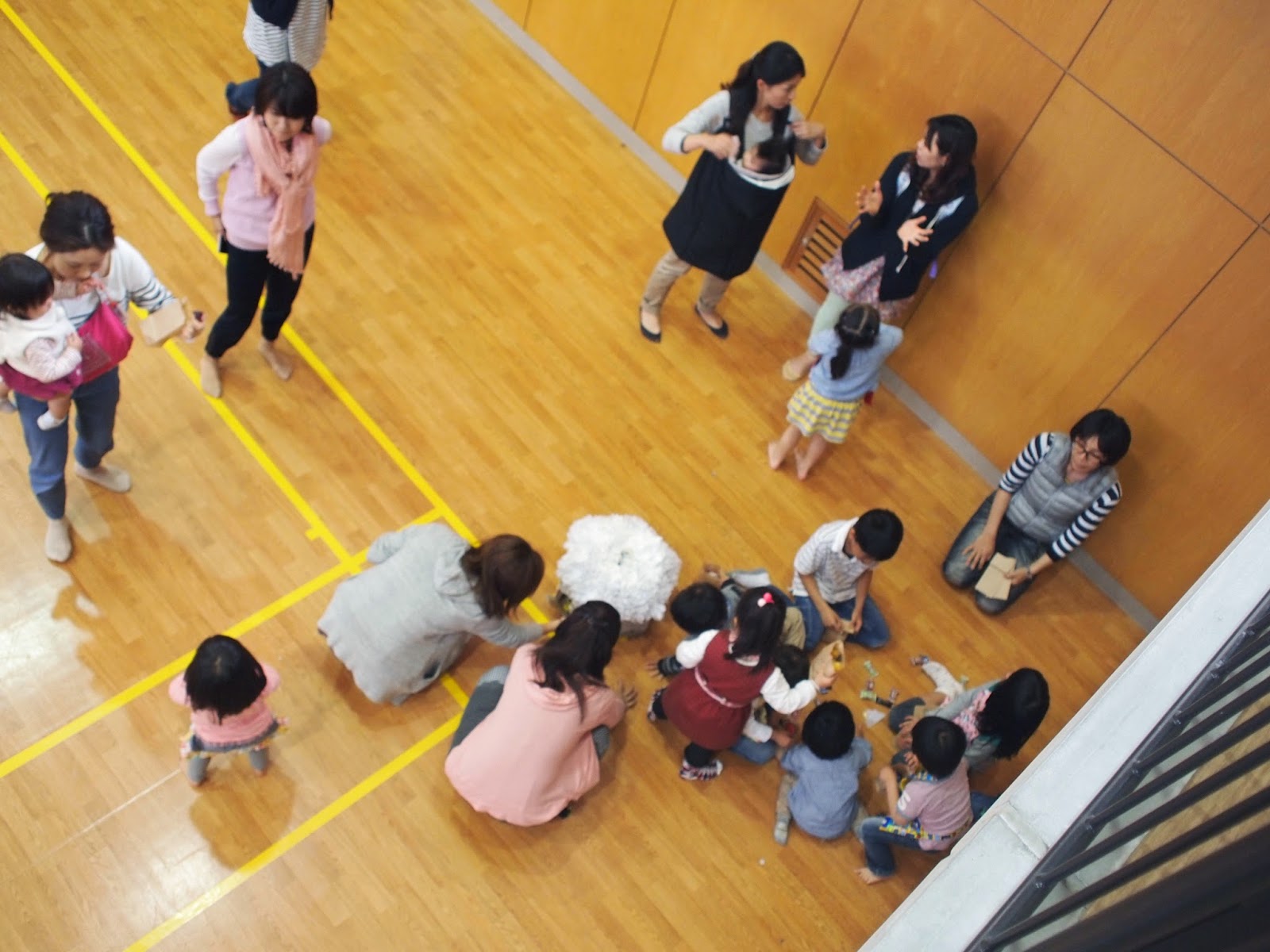 After the piñata, we all headed back to the main party room, cleaned up (everyone helped, thank goodness!!) and went home. Just like that, the party was finished. For me, the end of a party is always a little bittersweet. All of the preparation and time spent working and thinking about the party, and it is done in just a few hours. But seeing this dude's gigantic, beautiful smile 100% makes the hours I worked on this party worth it. This year was particularly bittersweet, however, given that he has these wonderful friends, and we have become friends with their equally as wonderful parents, and we are going to be leaving them all so soon. I know we will be back. I know he will make new friends in the US, and so will we. But for now, these are his bros. Who knows if they will even remember him in three years.

I hope they do. 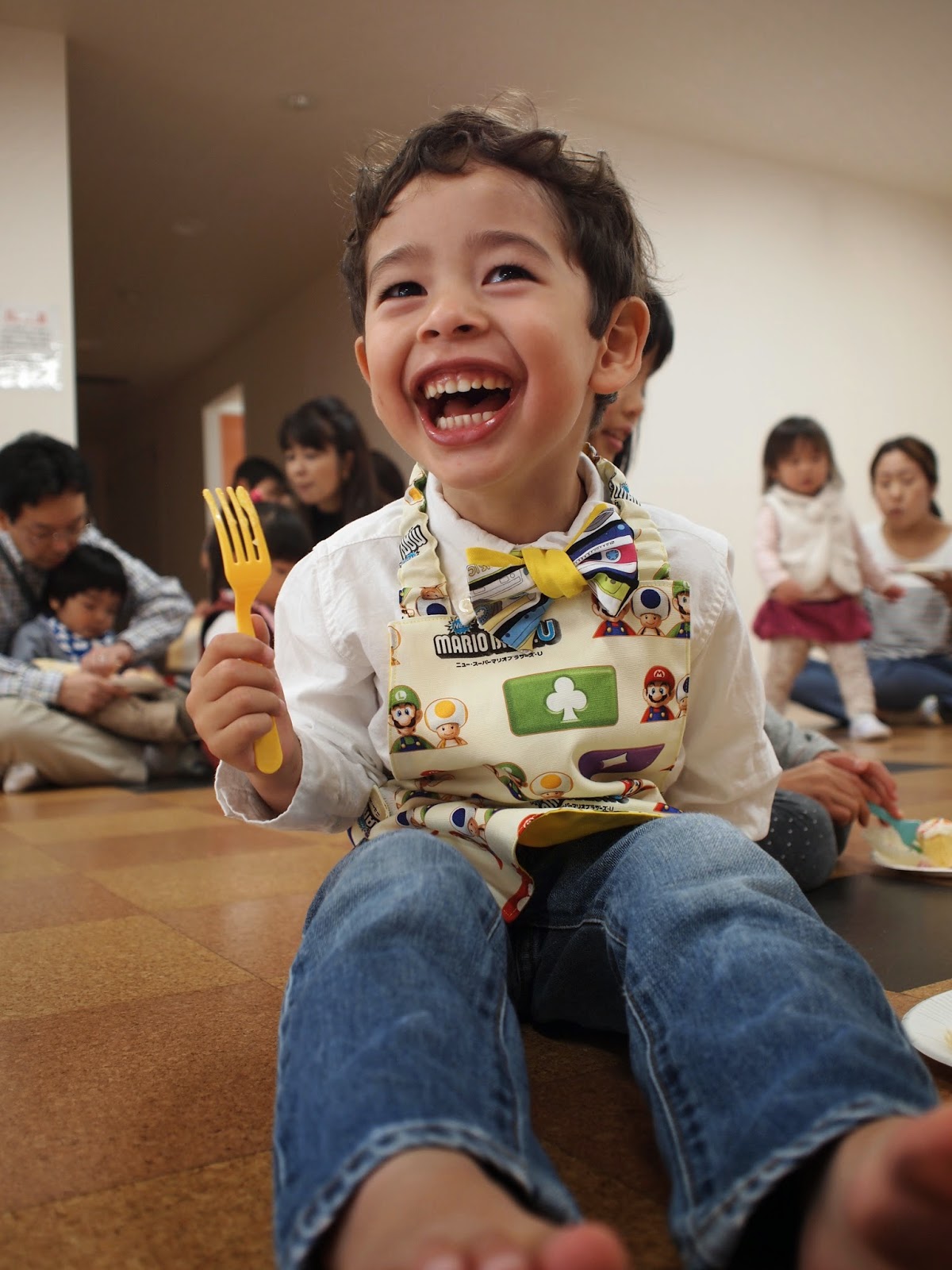 Email ThisBlogThis!Share to TwitterShare to FacebookShare to Pinterest
Labels: A Tutorial of Sorts, Birthdays, Celebrate, Cupcakes, Party, Things for K