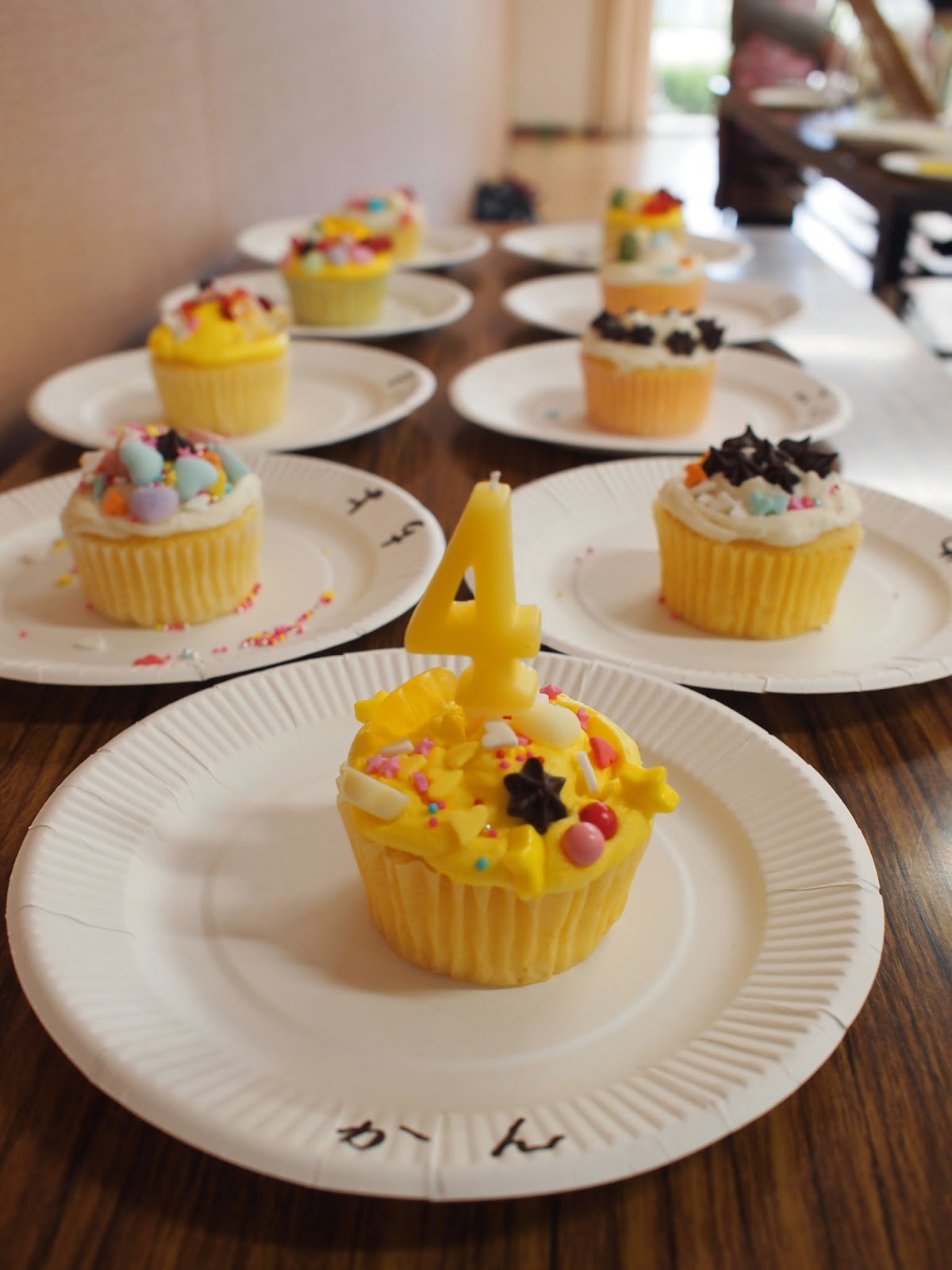 K's baking party was actually not a baking party at all - ha! It was more of a decorating and mixing party, but baking sounds so much cuter. For the party, since there were so many people, we rented out a big room in our complex and held the party there. Y's mom blew up TONS of balloons the night before, so we took about 8 garbage bags full of balloons to the room the morning of the party. The balloons were the only toys. I also set up three food stands, which were the "baking" portion of the party.
Remembering how much K and his friends loved the brownie decorating at his Halloween party, I figured we could do the same for this party. Instead of brownies, however, the kids would decorate their own cupcake that we all ate together after singing Happy Birthday to K. Most of the kids really enjoyed this and spent a good amount of time on their cupcake. A few weren't as into it, and instead were pretty set on running around the room, playing - just as well! 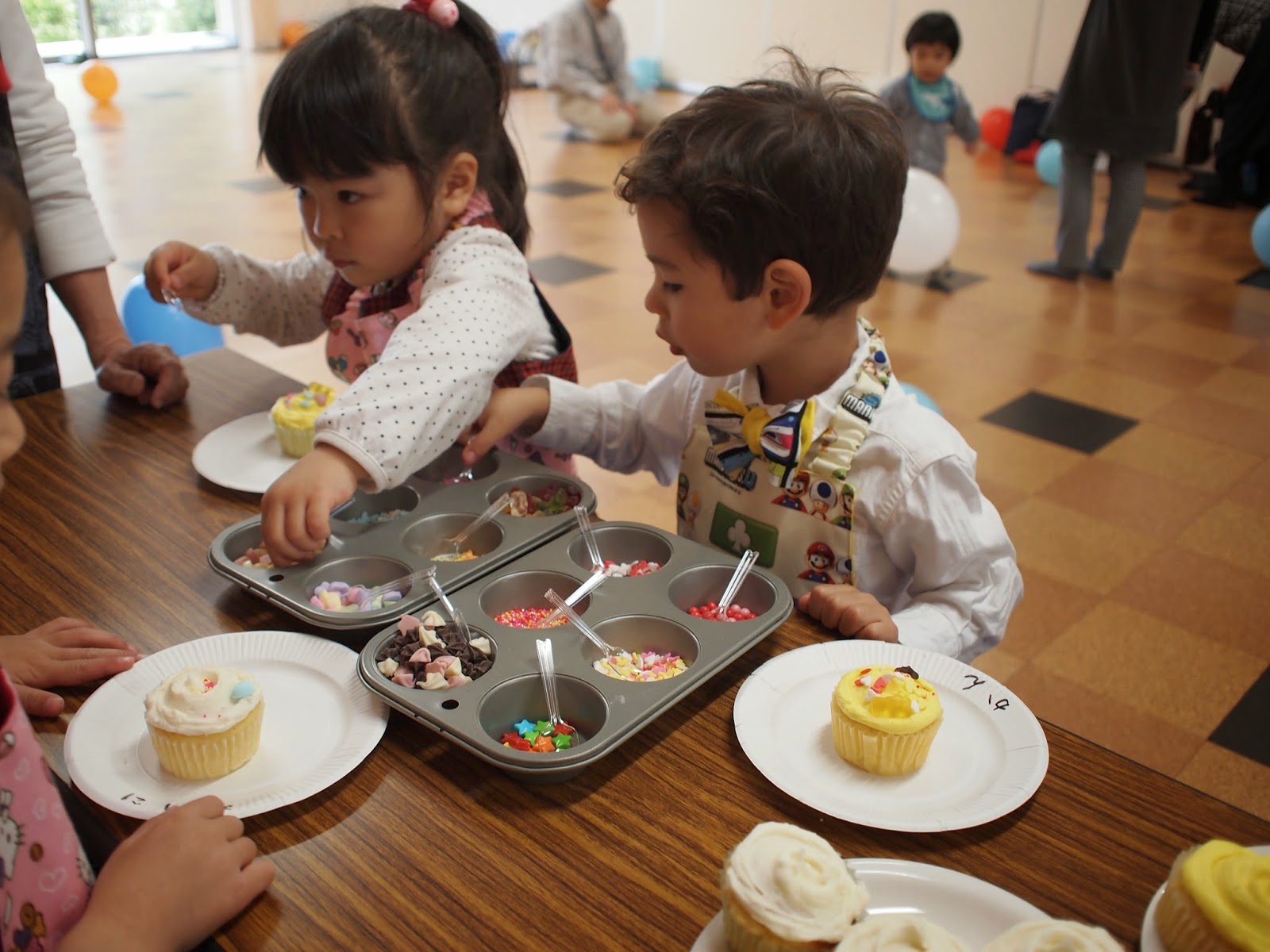 A week or so before the party, I baked a dozen vanilla cupcakes, using my standard vanilla cake recipe. Then I wrapped them individually, put them into freezer bags and threw them in the freezer. Two nights before the party, I pulled them out and frosted them using (a huge batch of) Magnolia Cafe's buttercream recipe. I used a minimal amount of powdered sugar, but it was still, of course, quite sweet. I divided the buttercream in half, and colored one half of it yellow, leaving the other half white (these were the colors for the main cake as well, which is also why I made a huge batch of it). Half of the cupcakes were frosted in yellow, the other half white. Then I put them in tupperware and stored them in the fridge until game time.
﻿ 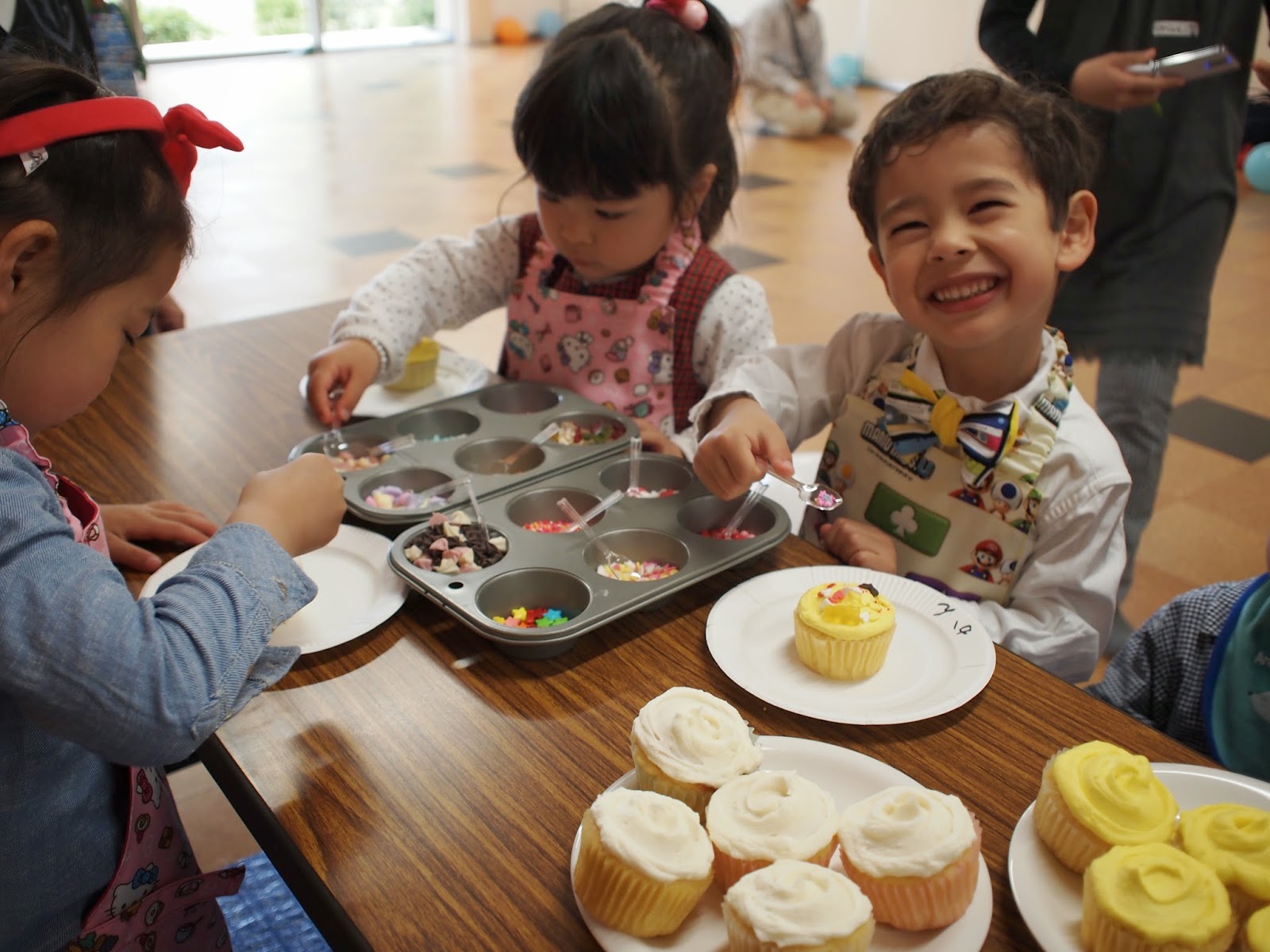 ﻿
For the party, I set up a different table for each of the three food stations. The night before the party, I made a little sign telling what they were supposed to do and also drew little pictures, hoping that the kids could look and work it out on their own. They didn't really, but whatevs. In addition to the sign, I also had all of the ingredients out on the tables. Here is the cupcake table, minus the cupcakes. The table in the back had a plate with each kid's name on it, so as not to confuse the cupcakes come eating time.
﻿ 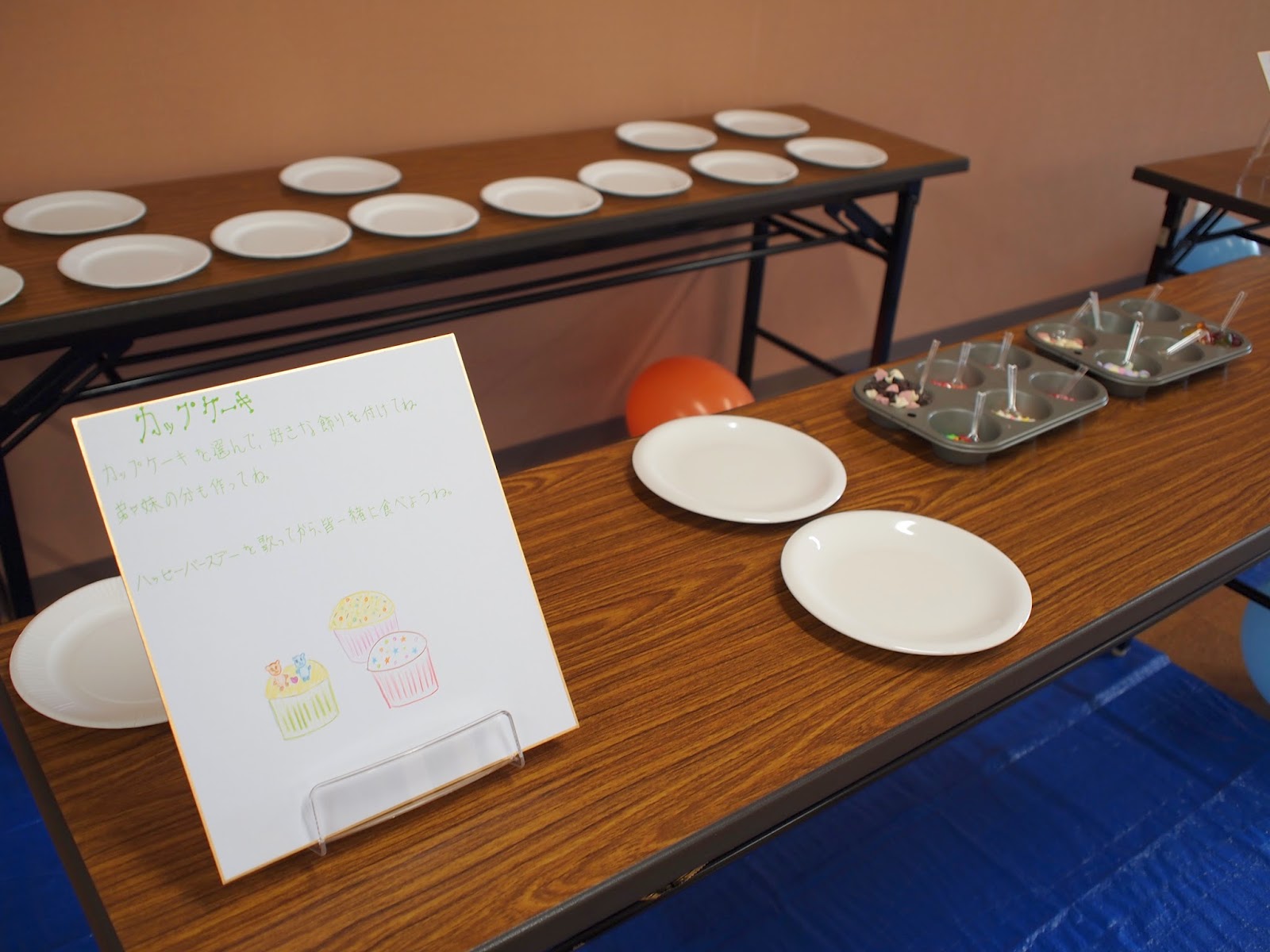 This was the "snack mix" table, I had a little glass jar labeled for each kid. They could put chocolate covered corn flakes, dried fruits, walnuts, wheat puffs, and M&Ms into the silver bowls, mix it up and put it in their jar to either eat at the party or take home. Most of the kids didn't do this until the very end of the party, but they all seemed to have fun deciding what to put in. It was quite funny, some kids loaded theirs up, while other put in a few dried fruits and called it a day.﻿ 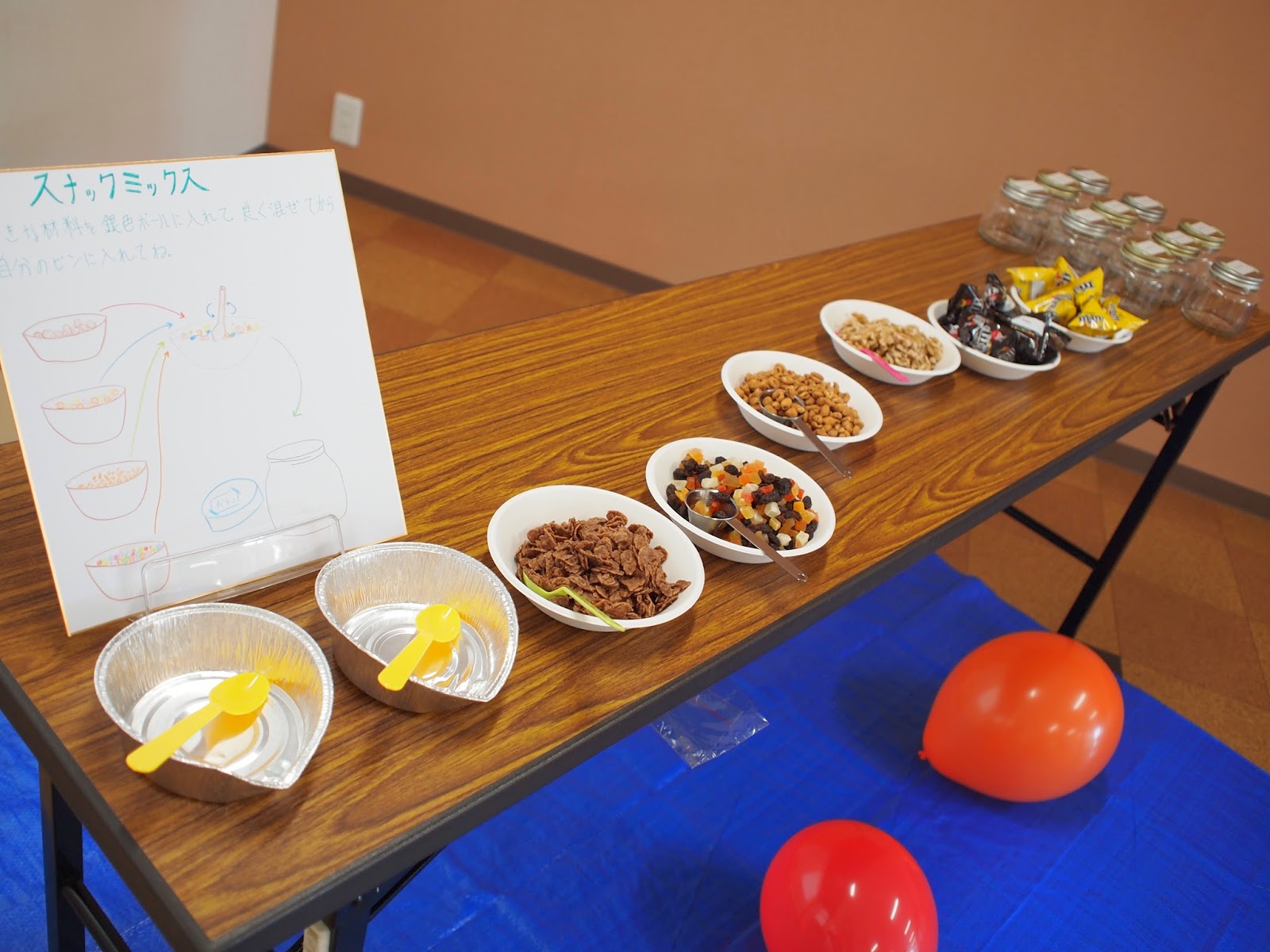 The final table was a parfait station. The kids used clear plastic cups and layered in yogurt, sliced strawberries and granola. Most kids were too busy playing with balloons to be bothered eating, but a few did make parfaits, as well as a few of the moms. I had cut up a whole carton of strawberries and got three cartons of yogurt, but only about half of the starberries were used and only about one half of a carton of yogurt. Extra yogurt is never a problem in this house! 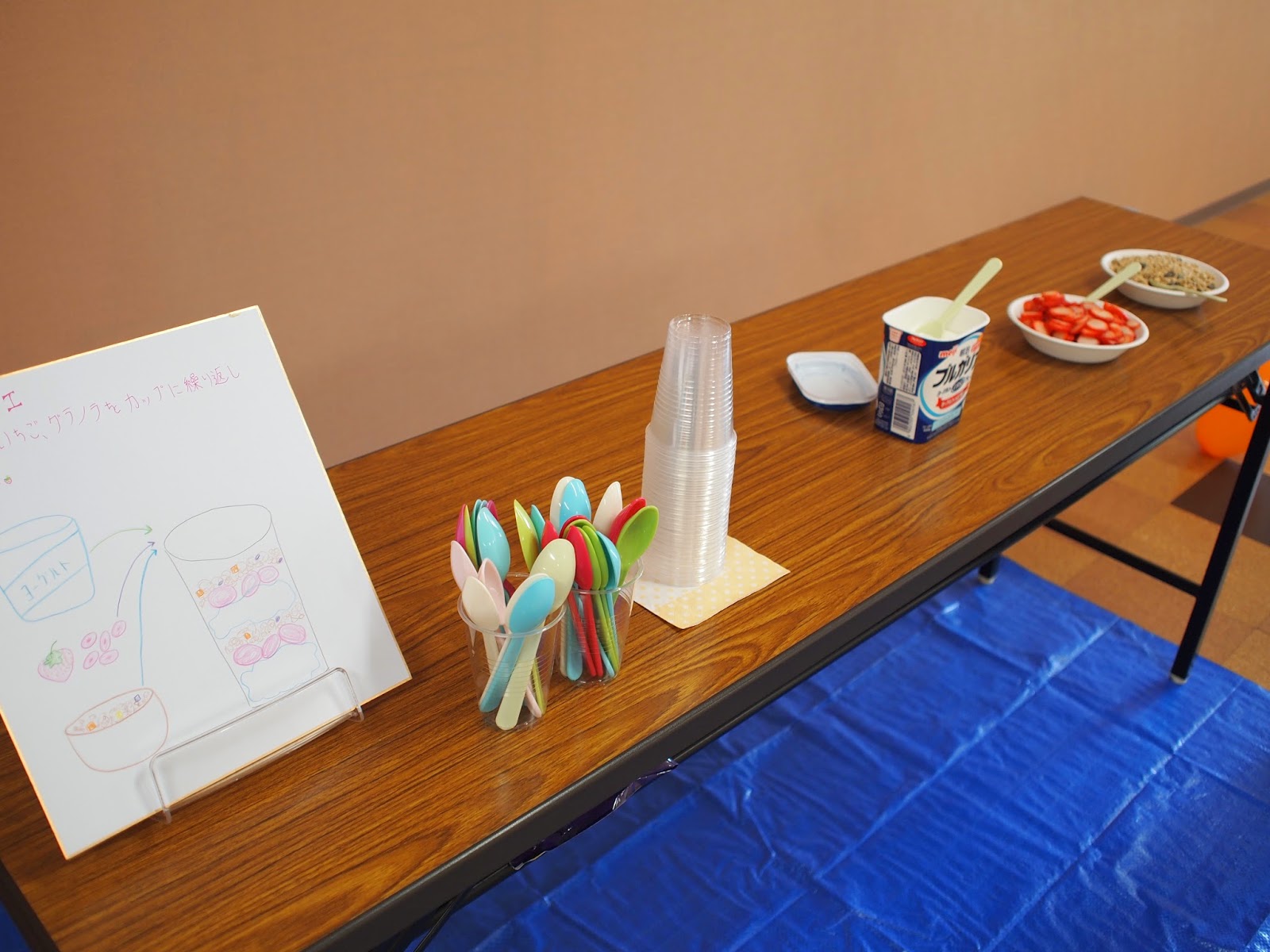 I envisioned the kids all decked out in aprons carefully making their snacks and cupcakes. That didn't happen because they were all too busy playing and running around with each other. I should have guessed that would be the case given that most of them were three or four years old. Regardless, the party was still cute with them in their aprons and I think it was best to have the little food stations even if they didn't get utilized as I had envisioned, as it would have been totally random to just have kids in aprons for no apparent reason. In the end, while the "baking" bit wasn't as successful as I had hoped, the kids had heaps of fun at the party and that is what it should be all about anyway.