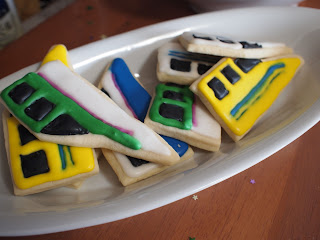 This week my blog is all about K's 3rd birthday party. The party started out with a Nozomi Shinkansen race, then a Dr. Yellow Shinkansen pinata, and then we went back to our place for snacks and cake. The snack that took the most amount of time to deal with were the Shinkansen sugar cookies.

Using my standard recipe for both the cookie and icing, I mixed up the dough and rolled it out. 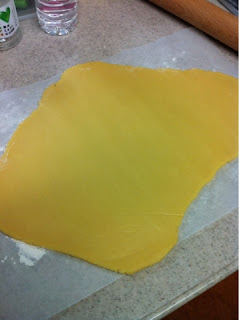 As I don't have a Shinkansen cutter (does one even exist?!), I had to hand-cut these. Ugh, this again. Using a ruler, I cut vertical lines all the way across the dough. 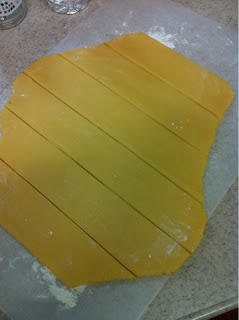 Then I carefully measured out 11 centimeters and cut a rectangle. 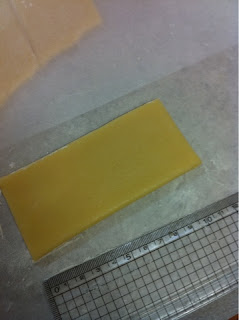 Going 5 centimeters back from the top corner, I cut a diagonal line, leaving a bit of the original line in the bottom corner as is. 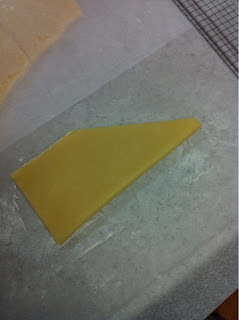 Since Shinkansens are not perfectly squared off, I used my fingers to round out the nose and the top corners. 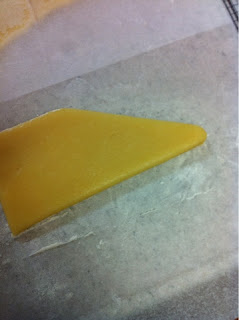 As any Shinkansen connoisseur knows, some of the faces are shaped a bit differently than just a straight line down - some have a bit of a curve in there. As I wanted a variety of Shinkansens, I did some with the straightish line and others with the curve. 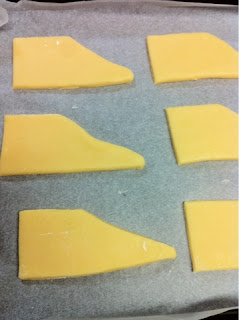 Then I baked them all and stacked them up according to facing direction and curve vs. straight face so I could decide how many of each to make. 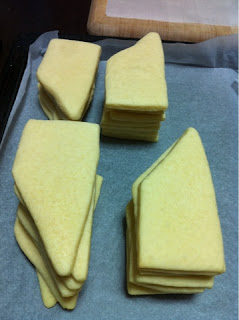 I decided on five of them in total - Dr. Yellow, Hayabusa, Nozomi, Yamabiko, and Hayate. Dude, this is serious biz. Using one of K's many Shinkansen books as a guide, I got to work. 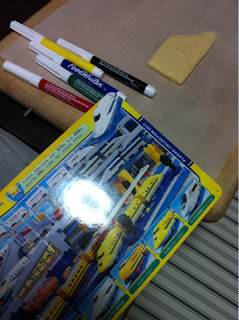 I started by using food markers to draw rough guiding lines on each cookie. I figured this would make the piping go much faster. I drew on windows and the stripes, as well as a mark to remind me of what icing color needed to go where. 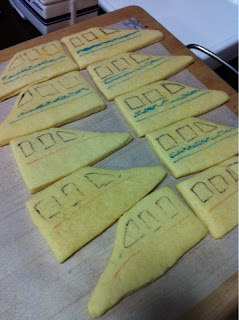 Then I made up my icing - such pretty colors. As a quick note, I knew that I wanted to make Dr. Yellow (blue and yellow) and Hayabusa (green, pink and white) cookies for K. After that, I looked through K's book to see what other Shinkansens I could make using those colors. That is how I ended up with the selection of five. 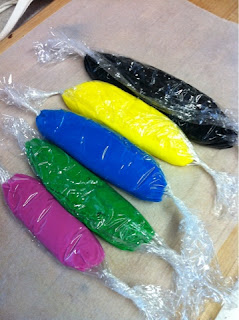 While K was at school, I piped the outline for every window. 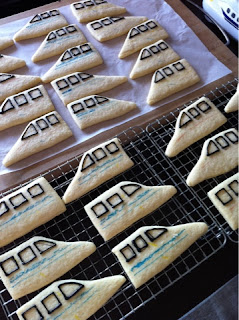 Then I filled them. This process took me a long time - a bit longer than I had anticipated. I was hoping to do the stripes as well while he was at school, let them dry and then after putting him to bed I could finish the body. This didn't happen. I got as far as the windows and then had to run downstairs to meet him at the bus. 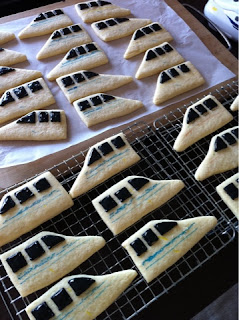 Due to my lack of time management, I don't have any other photos of the process. I just needed to crank these bad boys out. It wasn't terribly complicated from this point out, however, I just piped stripes, put a fan on them to help them dry and then piped in the body colors. I kept a fan on them the whole time hoping to minimize bleeding. I like to think it helped, but I really have no idea. ﻿ 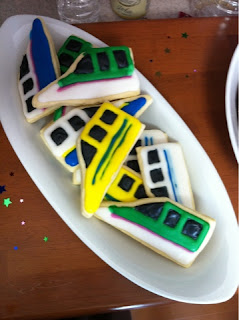 I had a big plate of these at the party and when K saw them, he was so super excited! The other boys (and even a few moms) seemed pretty stoked on them as well. They took a long time to make, and weren't as cute as I had originally envisioned, but as Y said, "They're fine. No one is going to look at them and think they are cars." True that. Also, in the end, any iced sugar cookie is pretty delicious in my book!