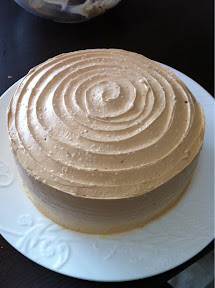 With all of the Valentine's Day stuff going on this week, I totally forgot about the cake I made on Sunday. We had K's best friend and his parents over for a little dinner party on Sunday, so for dessert I whipped up this cake. It was divine.

I used this cake and Swiss meringue buttercream recipe. Seriously it was delicious.

I'd made the salted caramel Swiss meringue buttercream months ago and remembering how amazing it was, I did it up again.

I 100% recommend making this. The cake recipe makes two quite tall cakes, so I sliced each in half, but only used three layers. 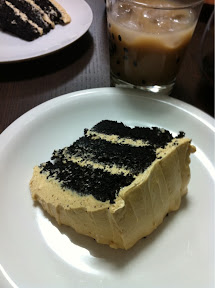 The fourth is in the freezer with the leftover buttercream. I'm so excited to bust it out one day when I really need a sweet treat.

If you do make this cake, particularly the Swiss meringue buttercream, there are a few things you should know.

First off, Swiss meringue buttercream (in general) seems like a huge challenge, fickle and on the only-for-serious-bakers side of things, but it's not. There are a number of steps (cook eggs and sugar over a double-boiler, make a meringue, add butter and flavorings) and it takes a while, but it's so worth it.

Second, the first time I attempted Swiss meringue buttercream, it was a summer afternoon and Y's friend from college and his fiancée were coming over for dinner. I found a delicious sounding recipe for vanilla bean cupcakes topped with Swiss meringue buttercream and candied lemon slices. Sounds great, right? Well the buttercream turned into curdled soup and was a disaster. I remember I threw the buttercream away, but don't remember what I did to save dessert. The moral of the story is that I was an uninformed idiot - you just have to keep mixing and it will soon come back to it's fluffy self. If it's too warm, throw it in the fridge for five or ten minutes and go back to mixing.

Once you make the meringue, it looks like this. 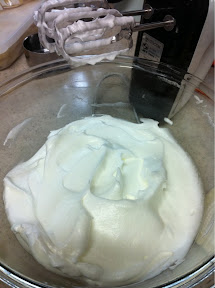 Gorgeous. Then you add butter and it turns to this. 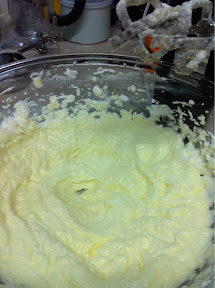 It's an awful picture, but it looks like curdled soup. You'll want to cry and think you've just ruined your gorgeous meringue. Don't cry. Keep mixing. 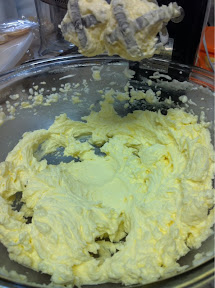 Starting to resemble something eatable. 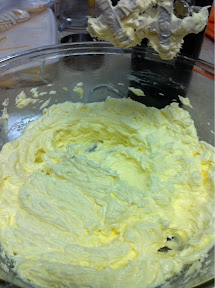 Again, awful photo, but it's actually much better now and looks delicious.

Third, if you make the salted caramel version, at this point you need to add in the caramel sauce you just made. The first time I made it, it was a perfect sauce consistency, this time it hardened. I didn't know what to do (I keep forgetting to look into why this happened). I was scared to heat it too much thinking it would hurt my precious buttercream, but without heating, it was nearly solid - like a caramel candy. I heated it a bit and added it to the buttercream, but it got all chunky. 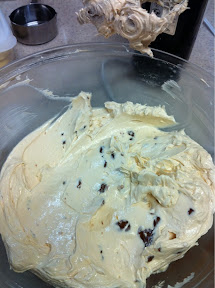 Gaaaa!!! I put the whole mess into the microwave for ten seconds and mixed again. I did this a million times, every once in a while switching it up with a trip to the fridge, and eventually it looked like this. 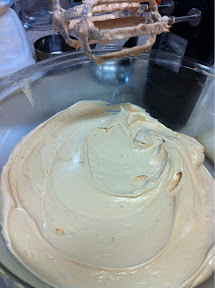 I cannot praise Swiss meringue buttercream enough. It is the far superior buttercream. It's deliciously creamy, light and just sweet enough. It never feels greasy in your mouth. It's heaven. Give it a go!!


- Posted using BlogPress from my iPhone
Posted by The Sugar Fairy at 8:53 PM