To celebrate little T turning 6 months old, we took a family trip to Hawaii last week! Just kidding - it was actually a trip to celebrate our 5-year wedding anniversary, but it just so happened that T turned 6 months halfway through the trip. For a few weeks now, T has been eyeing food. By that, I mean he gets really upset when people are eating and he's not. I didn't want to start solids until after Hawaii, both for convenience sake and also because I didn't want to deal with an allergic reaction while on holiday, should one occur. I promised, however, that as soon as we got back I would start solids. We got back Monday night, so Tuesday after naptime (and during my unpacking - hence the gigantic mess in the background), T had his first taste of rice. He seemed a bit unsure of it all. Today went much better - I imagine tomorrow will be even better than today. I think I've got an eater on my hands! 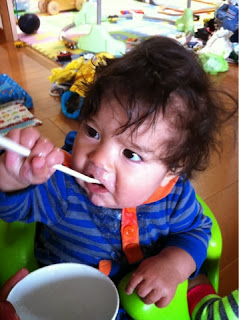 He can sit on his own for about 30 seconds now, but can't get there himself. 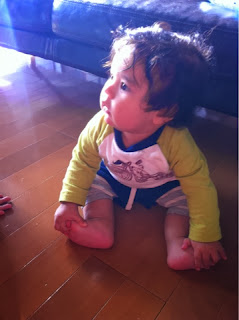 With a tiny bit of help reaching the top of the sofa, he can pull himself up and stand for a while. He tends to just randomly pick up his hands and topple over though, so I have to be pretty close when this is happening. 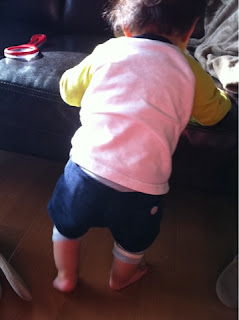 Along with solids, I gave him his first sippy up. He seems to like chewing on it, but I'm not sure if he's actually drinking anything. 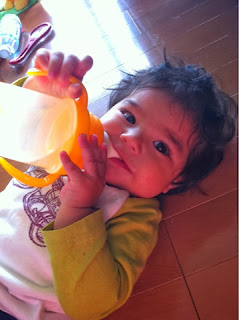 He loves to roll and scoot around, and his favorite places seem to be under the furniture - any sofa or coffee table will do. 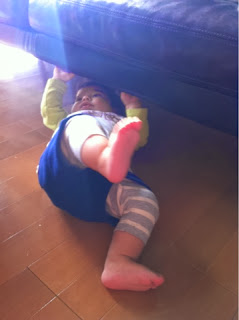 K is still an amazing big brother. He dotes on T and it melts my heart every time. While we were in Hawaii, T developed a cough. Whenever K hears him cough, he runs over, pats his back and coos "poor baby".  I think these two will be best friends forever.﻿ 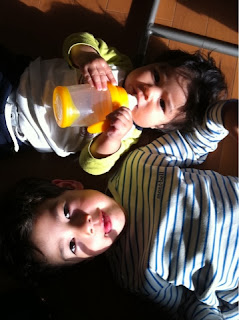 One last T-fun-fact is that he has curly hair (in the humidity, at least)!! I had no idea. The day we got to Hawaii his hair curled right up and it didn't straighten out again until the plane ride home. If you look closely at the family photo above, you can kind of see a little head of black curls.﻿
Anyway, back to the main post - in preparation for Hawaii I made T a portable high chair. I took photos while making this, but it seems that K accidentally deleted them. Whoops. Additionally, I can't seem to find the tutorial I used to make this, but to be honest it was quite confusing and had no pictures. I was able to work it out, but I was confused most of the time. In searching for the original tutorial, however, I found this one that is the same thing, but very clear and with photos. ﻿ 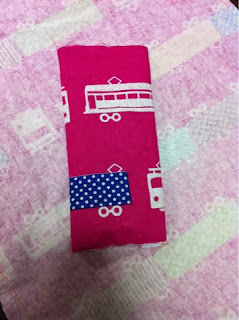 We rented a house in Hawaii which meant that almost all of our meals were eaten at a dining table in our "home". As a result, T was either rolling around on the floor, asleep, or being held by someone during every meal, so he didn't use the chair at all when we were at home. To celebrate our anniversary, however, we had a huge dinner at the same restaurant at which we had our reception. They had a high chair for T, but he is still so teeny that he kind of flopped around it in. I was able to use this one to strap him in a little tighter. He only lasted in the chair for about 20 minutes, before someone picked him up. It turns out that I probably didn't need to make this for the trip, but I imagine it will be helpful in the near future anyway.﻿ 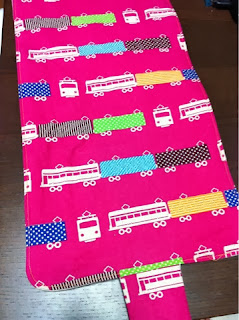